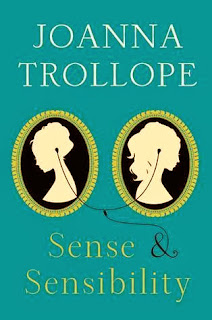 When I first heard about The Austen Project I was incredibly excited. As they explain it on their site, "The Austen Project is a major new series of six novels teaming up authors of global literary significance with Jane Austen's six complete works." Sounds awesome! I can't get enough of Jane Austen. Then I got to thinking...what if these retellings are awful? Sure, some great names have been attached to the updates (so far we know that Val McDermid will tackle Northanger Abbey, Alexander McCall Smith will update Emma, and Curtis Sittenfeld has the impressive task of taking on Pride and Prejudice) but that doesn't mean anything. They could butcher our beloved novels! After a bit of a panic, I decided to keep an open mind. I was glad I did because I think that helped me really enjoy Joanna Trollope's retelling of one of the classics, Sense & Sensibility.


John Dashwood promised his dying father that he would take care of his half sisters. But his wife, Fanny, has no desire to share their newly inherited estate with Belle Dashwood's daughters. When she descends upon Norland Park with her Romanian nanny and her mood boards, the three Dashwood girls-Elinor, Marianne, and Margaret-are suddenly faced with the cruelties of life without their father, their home, or their money.
As they come to terms with life without the status of their country house, the protection of the family name, or the comfort of an inheritance, Elinor and Marianne are confronted by the cold hard reality of a world where people's attitudes can change as drastically as their circumstances.
With her sparkling wit, Joanna Trollope casts a clever, satirical eye on the tales of Elinor and Marianne Dashwood. Reimagining Sense and Sensibility in a fresh, modern new light, she spins the novel's romance, bonnets, and betrothals into a wonderfully witty coming-of-age story about the stuff that really makes the world go around. For when it comes to money, some things never change. . .

I know it might sound weird but I actually wish things had been more different in this book. Of course, I have no idea how that could have been accomplished. For those of you who don't know the story, the basic plot line is that the lady Dashwoods have been turned out of their home after their husband/father passed away because, in the olden days, everything went to the male heir. In this book, which takes place in the present, the same thing happens. There are vague explanations and mentions of how ridiculous it is for property to be passed down through the males in this day and age but it was like I was just supposed to accept that this was the norm. I did, I suppose, but I think I wanted more creativity (think The Lizzie Bennet Diaries) than just the story we know with a few mentions of iPads and Twitter thrown in.

That being said, I'm glad the core story was still completely recognizable. The characters made sense and I enjoyed the slight changes that were made - Elinor wanted to be an architect, Marianne is a gifted guitar player, and Robert Ferrars is a very flamboyant event planner. I also have to say that I liked the more rounded characters of Mrs. Dashwood, Belle, and younger sister, Margaret (or Mags). The heart of the novel was still there and that's, in part, what makes us love Austen's novels so much. Trollope did a good job of making sure we were feeling what we expected to feel.

I did find that I couldn't shake the actors' images from the 1995 Ang Lee directed adaptation of Sense and Sensibility. It was especially hard to imagine the secondary characters as anyone else, particular Mr. Palmer who was played by Hugh Laurie in the film. I couldn't recall the actor who played Willoughby, though, and I was somehow able to put Alan Rickman out of mind when "Bill" Brandon was in the story. It's interesting to note how much actors and adaptations get into our heads when we go back to reread books (or read the next books, like in the case of Harry Potter). Do you ever find that? Do you think you could read this and not picture Emma Thompson or Kate Winslet as Elinor and Marianne?

Like most Jane Austen fans, I had my reservations about Sense & Sensibility. Could Joanne Trollope really do justice to such a popular classic? While I had my issues with the novel I really think that it was an enjoyable retelling of Sense and Sensibility. I think hardcore Austen fans might be more frustrated with it but if you go into reading this novel with an open mind, I think most will like it as much as I did.

*A copy of this novel was provided by the publisher, HarperCollins Canada, in exchange for an honest review.*
Posted by Books Etc. at 7:11 AM