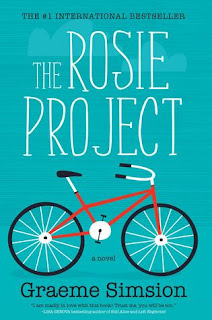 I had heard SO many good things about The Rosie Project by Graeme Simsion when it was first released in Canada this past May. I belatedly put myself on the library hold list and finally got the chance to read it (I say finally because my library didn't realize how popular it was going to be and didn't order enough copies even though Natalie from Browsing Bookshelves, a librarian in my city, told them to!). By the time I got the book I had totally forgotten what it was about and I think that was a good thing. I was able to enjoy the novel and getting to know main character Don without any expectations.


A first-date dud, socially awkward and overly fond of quick-dry clothes, genetics professor Don Tillman has given up on love, until a chance encounter gives him an idea.
He will design a questionnaire—a sixteen-page, scientifically researched questionnaire—to uncover the perfect partner. She will most definitely not be a barmaid, a smoker, a drinker or a late-arriver. Rosie is all these things. She is also fiery and intelligent, strangely beguiling, and looking for her biological father a search that a DNA expert might just be able to help her with.

The Rosie Project was completely different than any other novel I've read - which was awesome. I think some might compare it to A Curious Incident of the Dog in the Night-Time but I haven't read that one myself. One of the big things that makes the story different is the narrator. When we first meet Don, a genetics professor, he's about to present a lecture on Asperger's. It quickly becomes clear that he may have some characteristics that are associated with Asperger's. Since the story is told in first person, we really get a sense of Don and his...quirks, shall we say. He's very particular, analytical, and seemingly formal. For example, here's a paragraph from right at the beginning of the book:


The sequence was initiated by Gene insisting I give a lecture on Asperger's syndrome that he had previously agreed to deliver himself. The timing was extremely annoying. The preparation could be time-shared with lunch consumption, but on the designated evening I had scheduled ninety-four minutes to clean my bathroom. I was faced with a choice of three options, none of them satisfactory. (page 1)

The whole novel is written like that and while it may seem annoying it actually makes the book amazing. To the average person, Don's actions may seem odd but by reading in the first person we can see Don's motivations and understand why he's acting the way he is.

I wasn't sure how things were going to turn out in the end. There were so many options and I realized that I was really hoping that Don and Rosie would realize they were in love with each other and could be happy together. I really liked how Simsion wrapped up the story and thought it was a great way to end the novel.

The Rosie Project won't be for everyone but I found Graeme Simsion's enjoyable. It was a unique novel filled with both humour and serious topics and I think many others will like it as well.