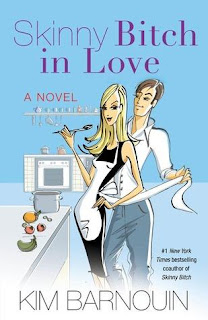 Raise your hand if you've heard of the Skinny Bitch cookbooks. Keep your hand up if you think that a novel written by one of the authors would be super enjoyable. Surprise! It was! I ended up absolutely loving Skinny Bitch in Love by Kim Barnouin.


Clementine Cooper is a born vegan, com­mitted in every way to the healthy lifestyle she was raised with on her father’s organic farm. But how bad could a little butter be? Bad enough to get the ambitious and talented sous chef fired when an influential food critic discovers dairy in Clem’s butternut squash ravioli with garlic sage sauce. Though she was sabotaged by a backstab­bing coworker, Clem finds herself unceremo­niously blackballed from every vegan kitchen in L.A.
Like any vegan chef worth her salt, however, Clem knows how to turn lemons into delicious, cruelty-free lemonade cupcakes. She launches the Skinny Bitch Cooking School in hopes of soon opening her own café in an empty space near her apartment. But on the first day of class, sexy millionaire restaurateur Zach Jeffries puts a fork in her idea with his own plans for the space—a steakhouse. Clem is livid. For a carnivore, Zach is more complicated than she anticipated. He’s also a very good kisser. But could dating one of the most eligible bachelors in the city—and a meat-eater—be as bad for Clem as high-fructose corn syrup? Shouldn’t she fall instead for a man who seems to be her perfect match in every way—like Alexander Orr, a very cute, very sweet vegan chef?

You know those books that you get totally sucked into and don't want to put it down for anything? Plans with friends, eating, sleeping, you know, the other important things in life. Skinny Bitch in Love was one of those books for me. I could have had it finished in one sitting if I hadn't gone to my boyfriend's baseball game - and I seriously considered either not going or reading during the game. As it was, I didn't go out afterwards and went straight home so I could finish the book before bed. I was that invested in the book and Clementine's story!

I loved Clementine. I want to be friends with her - and not just because she could cook me food! It helps that she's my age, twenty six, and trying to figure out what to do with her life, just like I am. Though, she is much more of a go-getter than I am and didn't let anything get her down. She's also the kind of person who attracts great friends. Her best friend and roommate, Sarah, is awesome and provides some great spunk and sass to Clem's life. She also has a great friend in Ty (I really hope it's Ty...I didn't write down his name and my eARC has since expired! Eep!) who understands how brutal the restaurant business can be and is always championing Clem.

I really liked the food aspect of this novel. It was an important part of the story but it wasn't told in a way that would confuse the readers. There are a lot of cooking and restaurant scenes and vegan food and terminology. I liked that Clementine really explained veganism and how you can be healthy while living that lifestyle. Personally, I could never do it full time (my family did for a bit and I had several very tasty meals when I visited on weekends) but I liked living in Clementine's world for a little while. I liked that she butted heads with Zach but he was willing to work with her and didn't judge her for not eating meat (in fact, I think it Clementine was doing more judging of Zach!). Anyway, the point is that Clementine's lifestyle made for a very interesting and enjoyable read.

The romance part of this story was great. I was just as torn as Clementine on whether she should date Zach, the oh so bad for her guy, or Alexander, the sweet and vegan guy. I wondered who was truly being sincere and who would be best for her. There are sweet scenes and sexy scenes, and everything in between. I really liked how things turned out for her in the end.

Skinny Bitch in Love is a great summer read. Kim Barnouin's novel will suck you in and you'll want to finish it in one sitting. So, pack up the book, your sunscreen, snacks, and refreshments and park yourself by the pool or at the beach - and enjoy!