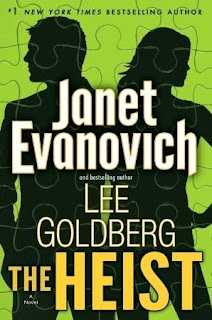 I'm a Stephanie Plum fan and have been for years. Because of that I've read and enjoyed a few of Janet Evanovich's other novels. I jumped at the chance to review her latest, The Heist, which she co-authored with Lee Goldberg. It was just what I was expecting - funny, a little sexy, and full of action.


FBI Special Agent Kate O’Hare is known for her fierce dedication and discipline on the job, chasing down the world’s most wanted criminals and putting them behind bars. Her boss thinks she is tenacious and ambitious; her friends think she is tough, stubborn, and maybe even a bit obsessed. And while Kate has made quite a name for herself for the past five years the only name she’s cared about is Nicolas Fox—an international crook she wants in more ways than one.
Audacious, handsome, and dangerously charming, Nicolas Fox is a natural con man, notorious for running elaborate scams on very high-profile people. At first he did it for the money. Now he does it for the thrill. He knows that the FBI has been hot on his trail—particularly Kate O’Hare, who has been watching his every move. For Nick, there’s no greater rush than being pursued by a beautiful woman . . . even one who aims to lock him up. But just when it seems that Nicolas Fox has been captured for good, he pulls off his greatest con of all: He convinces the FBI to offer him a job, working side by side with Special Agent Kate O’Hare.
Problem is, teaming up to stop a corrupt investment banker who’s hiding on a private island in Indonesia is going to test O’Hare’s patience and Fox’s skill. Not to mention the skills of their ragtag team made up of flamboyant actors, wanted wheelmen, and Kate’s dad. High-speed chases, pirates, and Toblerone bars are all in a day’s work . . . if O’Hare and Fox don’t kill each other first.

When I chose to read The Heist, I was looking for an easy and fun read - and I got it. I was interested to see how Evanovich worked with another author and how the story would read (see the next paragraph for my thoughts on that). I was also interested in these new characters and I ended up really liking Kate and Nick. I loved the chemistry between them and thought they played off each other perfectly. There was just enough action to keep things exciting without overpowering the intricacies of the con. There were also many laugh out loud moments that kept me entertained, like this one:

The one sort of negative I have is that it read a little too much like an Evanovich novel. I wanted more of Nick to come through in the story but his personality and secrets were overpowered by the action of the novel and Kate's personality and goals. I feel like he has a really great backstory but we didn't get the chance to learn it. There was a hint of it when he was on his way to Singapore (vague but I don't want to give anything away) but I was disappointed when that was really the only solo Nick portion of the book.

It's not often that I cast a novel but I have to make an exception in the case of The Heist. Why? Because right from the get go I was picturing Sandra Bullock as Kate. I know a lot of people see Bullock as Stephanie Plum but I never really got that. I think the reason Bullock came to mind first, apart from the physical description, is because she's played FBI agents in previous roles that I think are similar to Kate (see: Miss Congeniality and The Heat). As for Nick...well, I struggled to cast him but I ended up picturing him as Ryan Reynolds. The physical description of Nick - brown hair, brown eyes, height(ish), body - were all qualities that Reynolds shares. Plus, I did enjoy Bullock and Reynolds in The Proposal (not the best movie, I know, but I'd give them a second shot at the whole sexual tension thing). If you've read this book let me know how you would cast the film!

The Heist by Janet Evanovich and Lee Goldberg is a perfect weekend read. You can get sucked into the story and finish it within a day or so and fully enjoy yourself while reading it. I'm excited that this is going to be a series and I look forward to reading the next book!

*A copy of this novel was provided by the publisher, Random House of Canada, in exchange for an honest review*
Posted by Books Etc. at 7:48 AM