Well, friends, my life as an intern has officially come to an end. My last day of interning at Project Bookmark Canada was June 21 and, truthfully, I wanted to wait to post a final update because I had hoped I might have some exciting job news. No such luck, unfortunately, but I'll get into that more at the end of this post. For now, I'll update you on what I did since my last internship post (which you can read here if you missed it).

As I mentioned before, one of the major things I did for Bookmark was read books set in Calgary to see if any could be potential Bookmarks. I was a one woman reading machine with a goal of building a database! This was probably my favourite part of my internship - and not just because I was allowed to read all day (though that was an awesome bonus). I got to read about a city that I've never been to and visit it through the eyes of the authors. Sometimes there weren't any mentions of the city and sometimes very specific Calgary landmarks popped up (Nose Hill, the Bow River, Stampede grounds, and so on).

There were a few books that mentioned the town of Frank and the massive rock slide that demolished the city years ago (Googling...it happened in 1903). I found this interesting and so sad but I never looked into the history of it (which is why I just had to look up when it happened). The first (and, I admit, only) time I saw a picture of the slide was when author Angie Abdou tweeted a picture of her kids at the Frank Slide Interpretive Centre. (If her name sounds familiar it's because I read (and loved) her novel The Bone Cage and mentioned it in my last update.) Isn't that picture crazy? This exchange also makes me love Twitter even more. Thanks for sharing the pictures and info, Angie!

Because I'm sure you're oh so curious, here's the list of books I read over the course of my internship:

Reading these twenty books helped me see how varied Canadian literature can be. I used to always think it was boring and/or confusing literary fiction. Don't get me wrong, some of the above books fell into that category and I struggled to get through them. Others, though, were quite enjoyable.

Speaking of building a database, if you read any Canadian fiction and think it would be suitable for a Bookmark let me know! I can pass it along to Miranda. Or, if you're really interested in donating or helping out, visit their site and learn more about becoming involved.

During my non-working hours I also tried to read some the books that already have Bookmarks. I only managed to read three of the twelve but I think that's pretty good considering all the other reading I had to do! I read Garbo Laughs by Elizabeth Hay (the Bookmark is in Ottawa. I briefly saw while driving by when I was visiting my friend in April), The Queen of Unforgetting by Sylvia Maultash Warsh (this is the book set in Midland, my hometown), and Sailor Girl by Sheree-Lee Olson (this Bookmark is in Port Colborne, near Niagara Falls). Reading these books, especially the latter two, really made me realize how awesome Project Bookmark Canada is. I was so excited when places I knew popped up in the books. The more Bookmarks we have in place, the more novels, poems, and short stories we can highlight, and the more cities and towns we can celebrate. (Yes, I notice that I'm still using "we"...) When I was reading Sailor Girl, a book that has the main character working on ships, I was really excited when Midland was mentioned. So much so that I had to take pictures:

I went to Port Colborne the weekend after I finished reading the book and knew I had to stop by the Bookmark. I think being able to do that is just so cool! 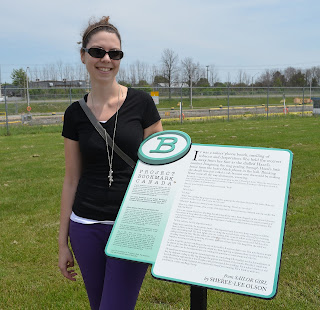 Another little perk, other than being able to work from home and read books all day, was getting a Bookmark t-shirt! 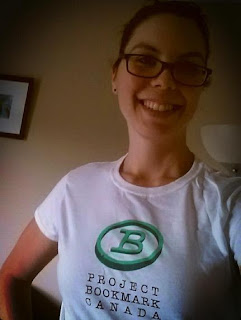 Over the last couple of weeks of my internship I did more admin stuff for Miranda (more accounting type things that really made our brains hurt), more researching (I learned about Library Way in New York City), and thought up some ideas for a project Miranda is working on (secretive, I know, but I'll share as soon as she launches it!).

So, where am I now? I've been unemployed for the past week and haven't had much luck jobwise. I had a brief spike of hope when I had a prescreening phone call for the job I really wanted but that seems to be all I was going to get. There are still two other jobs I'm waiting to hear about - one is in publishing and one is back in non-profit. I think it's because I had a few options that I've been able to treat this unemployment as a vacation of sorts. I haven't become too bummed out yet but there are definitely moments that I wonder what the hell I'm doing and if I'll ever be able to find a job I really love. It's been nice, though, that the weather has been hot and I've done lots of reading - since the 21st I've read four books (I really thought it was more, lol). But, I'm trying to stay positive and am looking forward to some more reading time. I'm also going to try to work on my blog a little more - more scheduling posts, more posts that aren't just reviews, and maybe some design changes. And I'm hoping I'll finally have time to read Miranda's book of short stories! 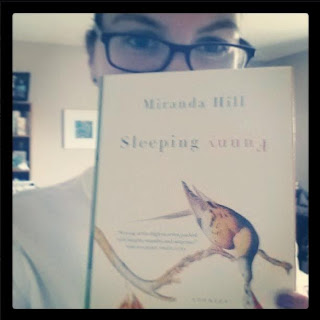 Finally, I want to say thank you to everyone who has supported me though this crazy journey. My friends have listened to be ramble on about not knowing what I want to do with my life and being worried that I won't find a job...ever. My family has done the same while also providing much needed advice and money. Finally, my poor boyfriend has put up with me when I was super tired from the ridiculous commute to Toronto, he made sure I had food to eat, and also dealt with my super chatty self when I was working at home alone all day (as bunnies don't make for good conversationalists). Thank you to all of you. I couldn't have made it through all this without you! Keep your fingers crossed for me! Hopefully I'll have some good news to share soon. :)
Posted by Books Etc. at 3:06 PM