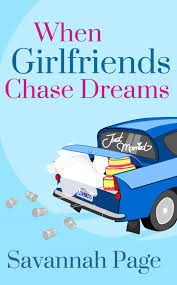 Welcome to my second stop on the CLP Blog Tour for When Girlfriends Chase Dreams! Today author Savannah Page has been kind enough to write a guest post for Books Etc. When I was reading the series I wondered what drew her to writing a series about such a dynamic group of friends so I sent along this prompt/question: Each book in the When Girlfriends… series features a different girlfriend. Did you always plan to alternate perspectives? And did you find that you had favourites? (I know that’s probably like asking a mother which child is her favourite!). I hope you enjoy Savannah's response!


In the earliest conceptualization stages of my When Girlfriends… collection I knew two things without a shadow of a doubt: 1) That I wanted a group of best friends from college to star in a friendship-themed set of novels, and 2) That each girlfriend would get her own story (and maybe, just maybe, two).

I wanted to alternate perspectives because I knew right away that each girl would grow on me and would have her own fab story to tell—they all just had to have their own novel. But I also did it as a way to flex my pen and better hone my craft. I had the main theme of friendship, and I had a solid set of characters, so with those things fixed I felt like I had a good chance to play with things that could be changed from book to book, like voice, tense, and POV. I knew before I even started that I didn’t want every single novel to have the same exact style. Similar, yes, so they can all be tied together as a family, but some differences here and there so I could show and practice versatility.

One of the toughest things, five novels in, has been to keep to my own distinct chick lit author voice, while at the same time have each character stand out as her own person and have her own way of telling her story. With each When Girlfriends… novel I want readers to feel like they’re still reading within the series/from the same author, but that they’re getting something new. Like they’re picking up a new diary.

As for a favorite girlfriend/novel? That’s a tough one! Definitely like asking a mother which child is her favorite. I really enjoyed writing When Girlfriends Chase Dreams because my day job is wedding-related (I blog for a wedding florist), and it was my NaNoWriMo baby. It was a blast to write, and Claire’s an endearing character. She’s full of so much energy and she’s just a sweetie (when she isn’t freaking out over planning her big day).

My latest release, When Girlfriends Take Chances, just might be my favorite. Emily is definitely an adventurer and free-spirited character. She inspires me and even reminds me to live each day to its fullest—take chances.

But, having said that, I still think that I’m most proud of When Girlfriends Make Choices. That novel made me push the envelope a bit and do something in both theme, style, and tense that I’ve never done. It took me longer than usual to write that one and I think the amount of time I invested, the constant rewrites, and the fact that I really wrote the book that was in my heart, make …Make Choices one of my absolute faves. Funnily, though, my favorite character just might be Sophie (When Girlfriends Break Hearts), but probably because I’ve been gathering ideas for her second book for a long while now. She’s been on my mind a lot!

Thanks for inviting me to guest post today, Kaley. I’m glad you could be a part of the tour!

Readers, don’t forget to enter the fabulous CLP When Girlfriends Chase Dreams Tour Giveaway. One lucky reader will win a 1 year subscription to the “Martha Stewart Weddings” or “Martha Stewart Living” magazine (print or digital). Details are at the CLP tour page.