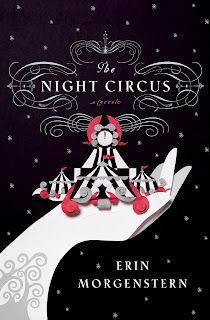 I'm slowly but surely moving along on my Reading Bingo card. I've been meaning to read The Night Circus for forever. I had no excuses, really. I knew it was great. I had even won a signed copy and it was sitting on my shelf, just waiting for me to make time for it. It seemed like everyone but me had already read Erin Morgenstern's novel and I decided I would finally set aside some time to read it. Boy, am I glad I did. This is such a terrific book.


The circus arrives without warning. No announcements precede it. It is simply there, when yesterday it was not. Within the black-and-white striped canvas tents is an utterly unique experience full of breathtaking amazements. It is called Le Cirque des Rêves, and it is only open at night.
But behind the scenes, a fierce competition is underway—a duel between two young magicians, Celia and Marco, who have been trained since childhood expressly for this purpose by their mercurial instructors. Unbeknownst to them, this is a game in which only one can be left standing, and the circus is but the stage for a remarkable battle of imagination and will. Despite themselves, however, Celia and Marco tumble headfirst into love—a deep, magical love that makes the lights flicker and the room grow warm whenever they so much as brush hands.
True love or not, the game must play out, and the fates of everyone involved, from the cast of extraordinary circus per­formers to the patrons, hang in the balance, suspended as precariously as the daring acrobats overhead.

As soon as I started reading this I could see why everyone was raving about it when it was released a few years ago. It was fantastically magical, deliciously twisted, and so odd in a completely understandable way. When I was reading it I knew that it was made up but I still thought, "Of course these illusions could be real. Why wouldn't they be?" Like all fantasy books you have to allow yourself to believe that these things could actually be happening and once you do that you can really enjoy the book.

I really liked how the story was told. There was present day where you, the reader, are visiting the circus yourself. Then there's what I was calling the past-past which starts at the beginning of the challenge (roughly) and moves forward from there. Finally, there was the past that starts with Bailey's story. As the novel went on I was really looking forward to what would happen when the two pasts converged because I knew that would be when I would get most (if not all) of the answers I desperately needed.

I definitely recommend reading this book in one sitting if you can manage it. If not, reserve it for a weekend. I needed to read a book that was a little different after reading two very similar books back to back. This book won for the "little different" aspect and I read the majority of it on my commute to my internship. This, I learned, was a mistake. The Night Circus needs to be savoured and thoroughly enjoyed and that needs to be done on the couch with a mug of tea, not on a packed commuter train!

Overall, I loved The Night Circus. Erin Morgenstern's debut novel is fabulous and I highly recommend it. You need to like those books that are a little different, a little fantastical, to really enjoy this so if that's your thing, make sure you read this one. You won't be disappointed! 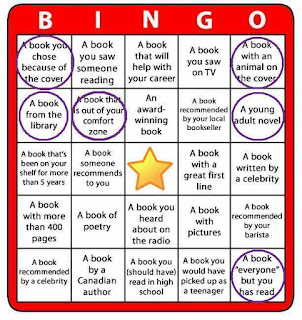 I'm now all caught up on my Bingo reviews but I have a couple already set for other squares (Canadian and would have read as a teenager are two of them) so stay tuned for more reviews in the next month or so!
Posted by Books Etc. at 7:06 AM