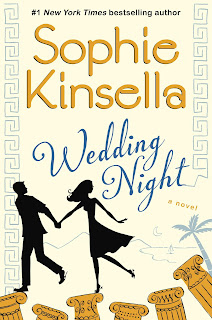 Sophie Kinsella is a must read author for me. I've been reading her for so long that I can't even remember when I first picked up one of her novels. I was so excited when I heard that she was releasing a new book and Wedding Night did not disappoint. It was exactly what we've come to expect and love from Kinsella - funny, sweet, and crazy chick lit.


Lottie just knows that her boyfriend is going to propose during lunch at one of London’s fanciest restaurants. But when his big question involves a trip abroad, not a trip down the aisle, she’s completely crushed. So when Ben, an old flame, calls her out of the blue and reminds Lottie of their pact to get married if they were both still single at thirty, she jumps at the chance. No formal dates—just a quick march to the altar and a honeymoon on Ikonos, the sun-drenched Greek island where they first met years ago.

Their family and friends are horrified. Fliss, Lottie’s older sister, knows that Lottie can be impulsive—but surely this is her worst decision yet. And Ben’s colleague Lorcan fears that this hasty marriage will ruin his friend’s career. To keep Lottie and Ben from making a terrible mistake, Fliss concocts an elaborate scheme to sabotage their wedding night. As she and Lorcan jet off to Ikonos in pursuit, Lottie and Ben are in for a honeymoon to remember, for better . . . or worse.

Some of you may know that I just recently completed an internship at Random House of Canada (you can read my recap of it here if you like). In my first couple of days I realized that Kinsella is a Random House author so I was eagerly waiting for the ARCs to come in. One day I was grabbing something from the book room, looked down, saw the box of advanced copies, and, I kid you not, gasped and held my hands to my chest. That is how excited I was to see the ARCs in front of me. Knowing the right people paid off and I left work that day with a copy in my hands.

I do find that it has gotten to a point that I go into reading Kinsella's novels knowing the main character will drive me at least a little batty. I'm not sure that's a good thing, either. I mean, I'll keep reading her novels because I always end up loving (or at least liking) the character. It can just get a little frustrating when they act so silly and flighty.

As much as I enjoyed the two perspectives (Lottie and Fliss), I think I needed a bit more...something...from both sisters. I was chatting with someone about this book over a month ago now and she mentioned that it seemed like Kinsella didn't always know when she planned on switching perspectives. I can kind of see that. There didn't seem to be any real rhyme or reason to when it was Lottie or when it was Fliss. Overall though, that was a minor detail and I appreciated getting to see things from two points of view.

The story itself was amusing. I liked that it took place in an exotic location and there was a travel element involved. I am also SO glad that Fliss' son was part of this story (don't have my copy in front of me and his name is escaping me!) because he was so hilariously adorable and clever. He was around seven years old and some of my favourite scenes involved Fliss and Lorcan talking in code around him. I won't get into detail but let's just say the words "sausage" and "cupcake" were used, to my great amusement. I liked seeing Fliss and Lottie evolve, shall we say. They both had some major issues and they worked their way through them with minimal collateral damage.

All in all, I enjoyed reading Wedding Night. Sophie Kinsella had me laughing throughout the novel, as is typical with her books. I wondered if this might be the one to overtake Can You Keep a Secret? as my favourite Kinsella novel, but it just wasn't meant to be (hm, should really reread that one...). Maybe Kinsella's next novel will become my new favourite! Wedding Night is released this upcoming Tuesday, April 23rd, and if you're a chick lit fan you should definitely check it out!

*I received a copy of this novel from Random House of Canada in exchange for an honest review*
Posted by Books Etc. at 7:54 AM

Email ThisBlogThis!Share to TwitterShare to FacebookShare to Pinterest
Labels: Can You Keep a Secret, chick lit, Sophie Kinsella, Wedding Night