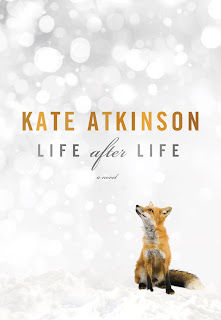 My goodness. What can I say about Kate Atkinson's latest book, Life After Life? Well, it was excellent. It was also a bit confusing. In a good way. I finished this a week ago and I'm still not entirely sure what happened. And that's kind of awesome.

Here's what this book is about:


What if you had the chance to live your life again and again, until you finally got it right?During a snowstorm in England in 1910, a baby is born and dies before she can take her first breath.
During a snowstorm in England in 1910, the same baby is born and lives to tell the tale.
What if there were second chances? And third chances? In fact an infinite number of chances to live your life? Would you eventually be able to save the world from its own inevitable destiny? And would you even want to?
Life After Life follows Ursula Todd as she lives through the turbulent events of the last century again and again. With wit and compassion, she finds warmth even in life's bleakest moments, and shows an extraordinary ability to evoke the past.

Can you kind of see how it is possible to get confused? Living a life over and over again? I did like that each life was in a different section. For example, every time it went back to the beginning of Ursula's life, the day she was born, the chapter was titled "Snow" and during November 1918, the titles were "Armistice." I probably would have been even more confused had the chapter titles not been used.

I've heard a few people say that they found this book a little difficult to get into and I was no different. In fact, I started it on a Sunday, read a chapter or two and then decided it was a good time for a nap. (This didn't really have a lot to do with the book, I've been extremely sleep deprived lately.) I wasn't intrigued enough to keep with it but once I picked it up again a few days later...oh man. I didn't want to put it down. If you're one of the ones who aren't thrilled with the start of the novel, my advice is: STICK WITH IT. You won't be disappointed. I think what makes it a little slow to start is that she keeps going back to the beginning. It's not until a little later in the book that she really builds up a life (or two, or three). At that point, there were times where I wanted darkness to fall (that's the phrase used when Ursula dies) so we could move on to the next life. It took some getting used to but the reincarnations eventually, sort of, make sense. I think.

Can we just talk about the cover for a moment? I am absolutely in love with the Canadian cover (above.) So much so that I refuse to lend my book to anyone - even though I could easily take the jacket off. And, yes, I kind of want to put it in a place of honour somewhere. Which I do not find weird at all... Not only do I enjoy the Canadian cover more than the American and UK versions, but I just think it makes more sense with the story. The fox is present because the house Ursula grew up in is called Fox Corners. And, even though you can't see it, there's a rabbit on the back which fits in with the rabbits Ursula and her sister have when they're younger.

Isn't the lovely snow covered scene featuring a fox so much prettier that the above covers? There's only one possible explanation that I could come up with for the roses on the American cover, and it's not really integral to the story. I mean, it's not a bad cover but after seeing the pretty white one, it's hard to love it. Now. The UK cover. Blergh. I think this one's a little too obvious - there's the snow (that I've already mentioned the importance of); the brick wall that, I would guess, represents the bombings in London in WWII; the Roman numerals that, I suppose, represents the repetition of time; and the little girl, who is likely Ursula. Anyway. I'm totally biased since the one with the fox is what I'm used to but it's still my favourite. What do you think?

Even without the various reincarnations of Ursula, this would be an interesting story.You wouldn't get the full impact of what certain things, like WWII, were like without a few of her different lives, but the historical aspect of the novel makes it so much better. This story makes you really think, what if history could have been changed?

I want to note that this isn't really a pretty story, either. There are murders, there are deaths (two World Wars happen throughout the novel), there is abuse. There's one death in particular that I hated reading about as it came up again and again.

If you're looking for a new read that's a little bit different, pick up Life After Life. It's so enjoyable and Kate Atkinson has woven an interesting and thought-provoking novel. If you're a fan of The Time Traveler's Wife, check this one out. I think readers of all genres can find something to like about this novel and I highly recommend it.

As you can see from the title of this post, this was another box marked off for the Random House Reading Bingo. I've read and marked off a few more squares, I just haven't gotten around to writing the reviews yet! If you're taking part in the bingo, how are you doing? 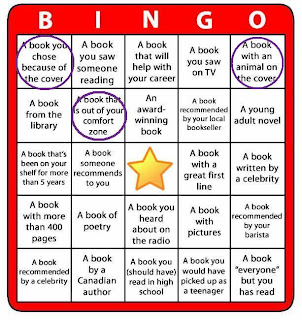