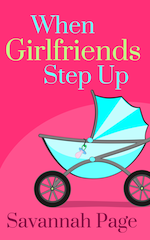 Today is my stop on the When Girlfriends Step Up blog tour! I am so glad I signed up for the CLP Blog Tour for this title because I adored it. Author Savannah Page has created a great series!


A novel about love and support, and learning that with enduring friendships, no woman is ever alone.
Robin Sinclair is young, determined, and has a promising career at a small publishing house in Seattle. Even though she considers herself unlucky in love, Robin still dreams of eventually meeting Mr. Right and having a happily-ever-after kind of life. And at twenty-five, the world of opportunity is wide. But it’s been a difficult year filled with trials…and it’s only just begun.
While long-time friendships are finally on the mend, and things are starting to look up again, Robin is faced with her biggest challenge yet. She’s single and pregnant.
Uncertain now of her future and scared of being alone, Robin must re-examine her life and choices, and summon the courage to step up.
With the love and support of her best girlfriends from college, especially her best friend and roommate, Lara, Robin will learn that when the going gets tough, the best of friends become family. And, perhaps, with their encouragement, Robin can mature and gain the confidence needed to become a single mother. And, who knows about being unlucky in love. Things are suddenly getting interesting with Robin’s attractive co-worker, Bobby.
This is the endearing sequel to When Girlfriends Break Hearts about maturity and perseverance. It’s a story about friends coming together as family, about finding the strength within and around, and about writing your own happily-ever-after. About what happens when girlfriends step up.

My first thought about the book didn't have anything to do with the plot or the author or anything like that. No, my first thought was "How the heck did I miss that this was the second book in a series?" Followed by a bit of internal cursing. I hate reading books out of order and was annoyed at myself for not realizing sooner that I should have picked up book one before this one. Alas, I did not have enough time to read When Girlfriends Break Hearts before I needed to dive into book two for this tour. As it turns out, I was able to figure out what had happened in the previous book because Page did a great job of summarizing the action and letting me know where the girls stood at the start of book two. Since I was all caught up, the only annoyance that remained was due to the fact that I wanted to spend even more time with these girls and wished that I had started at the beginning with them.

I loved that the characters were all in their mid to late twenties, since that's the stage of life my friends and I are at now as well. It was so easy to relate to them and I could find qualities of myself and my friends in the six girls in the novel. I think the friendship between Robin, Sophie, Lara, Claire, Emily, and Jackie was my favourite part of the book. Their interactions were so realistic and it was so much fun to read about their escapades.

The actual plot was also realistic. I found myself completely immersed in the story and really felt like I was going through everything right alongside Robin. Though I must say that that was actually quite terrifying as I'm the same age as Robin and am scared to death of ending up in the same situation she found herself in. But other than that little detail, I really felt like I was part of Robin's inner circle.

I think the When Girlfriends... series by Savannah Page is a must read for all chick lit fans. I loved When Girlfriends Stepped Up because it shows the power of great girlfriends and was a really enjoyable read. I was definitely happy that I had the third book in the series, When Girlfriends Make Choices (review is up on the 4th), ready to read immediately after finishing this one. I couldn't wait to see what happened next!