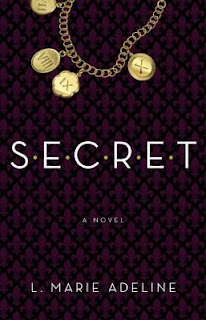 I need to start this review off by saying that S.E.C.R.E.T. by L. Marie Adeline (pseudonym for author Lisa Gabriele) is not like Fifty Shades of Grey. I'll get into why in a bit. What you need to know now is that this novel was entertaining and sexy and I enjoyed reading it.

No judgments. No limits. No shame.
Cassie Robichaud’s life is filled with regret and loneliness after the death of her husband. She waits tables at the rundown Café Rose in New Orleans, and every night she heads home to her solitary one-bedroom apartment. But when she discovers a notebook left behind by a mysterious woman at the café, Cassie’s world is forever changed. The notebook’s stunningly explicit confessions shock and fascinate Cassie, and eventually lead her to S∙E∙C∙R∙E∙T, an underground society dedicated to helping women realize their wildest, most intimate sexual fantasies. Cassie soon immerses herself in an electrifying journey through a series of ten rapturous fantasies with gorgeous men who awaken and satisfy her like never before. As she is set free from her inhibitions, she discovers a new confidence that transforms her, giving her the courage to live passionately. Equal parts enticing, liberating and emotionally powerful, S∙E∙C∙R∙E∙T is a world where fantasy becomes reality.

As I mentioned, this is not just another Fifty Shades knock off. Why's that? There are a few important differences...

I did read Fifty Shades so I am doing an honest comparison here. That trilogy didn't do anything for me. Anna was just so irritating and I did not find Christian attractive. All that being said...I don't want to compare the two books. I'm not going to say if you liked Fifty you'll like this because I don't think that's fair to either story. I saw Chapters do that the weekend before this book was released on their Facebook page and I fear that the comparison will turn people off since so many people hated Fifty Shades. Of course, if you did enjoy the erotic elements definitely pick up this book.

S.E.C.R.E.T. is another story. Literally. I was talking to someone about this book and she made a good point about what makes this novel intriguing. You kind of want to be a part of this secret society. You want to know where you can sign up because who doesn't want to have some of their fantasies come true? Between wanting to know what the group's secret is and the (really irritating) cliffhanger, I'm looking forward to seeing what book two will bring.

Cassie was an interesting character. She doesn't think much of herself in the beginning. She's quite boring and keeps to herself instead of going out or flirting with her attractive and interested boss. Agreeing to the first step signifies the first change  in her. She realizes that she needs to change herself and she agrees to go on this seemingly crazy adventure.

*A copy of this novel was provided by Random House of Canada in exchange for an honest review*
Posted by Books Etc. at 11:03 AM