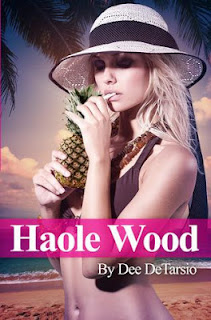 If I were to pick one word to describe Haole Wood by Dee DeTarsio, it would be whirlwind. And not just because main character Jaswinder was a weathercaster. There's so much amusement and craziness happening in this novel that it kept me turning the pages to find out what on earth was going to happen.


When San Diego weathercaster, Jaswinder Park, is mysteriously summoned to the island of Maui in Hawaii to help her grandmother, she ends up losing her job. This fair-haired, light-skinned foreigner, called haole by the natives, decides to stay in Maui for a couple of days until she can figure out what to do with her life. She realizes that her quick trip to Maui may not be all she’s hoping for when:
Beautiful fabric found in her grandmother’s closet unfolds a future for Jaswinder as she designs sensuous silky wraps called sunshminas that provide sun protection. She tries for a Hollywood connection, but her company, Haole Wood, has some growing pains. From trying to find a killer, to selling her sunshminas, to lusting after Dr. Jac, the island dermatologist, to trying to ignore her so-called guardian angel, can Jaswinder learn to embrace the island way of life? Aloha!

Oh man, was there ever a lot going on in this book. That didn't always translate into a bad thing but I think that is the reason I didn't love it as much as I thought I might. The part that really kind of confused me was the whole guardian angel thing. I couldn't see how it connected to anything else and made me wonder if 1. Jaswinder had completely lost it and 2. her grandmother was putting some sort of hallucinogen in her tea. It was funny and provided some insightful moments for Jaswinder but having a guardian angel in this novel just didn't work for me.

The murder mystery part of this story is what I liked the most. Everything that could go wrong with Jaswinder's (completely unofficial) investigation, did. She seemed to stick her foot in her mouth at every turn and it was incredibly amusing. What made this part better was that she was doing all this craziness to clear her grandmother's name. She has such a strong and wonderful connection with her grandmother (even though Jaswinder only understands "Not that") and that made me like her so much more.

Overall, I had fun reading Haole Wood. Dee DeTarsio created amusing characters and an engaging story. I think some things could have been trimmed and/or cut out but, to me, the writing and flow of the story worked and that made it an enjoyable read for me. Did I love this one? No. Will I check out more of her novels in the future? Yes, I do believe I will. Even if they're not set in Hawaii! ;)

* I received a copy of this novel from the author in exchange for an honest review.
Posted by Books Etc. at 8:24 AM