Just Finished: Much Ado About Magic 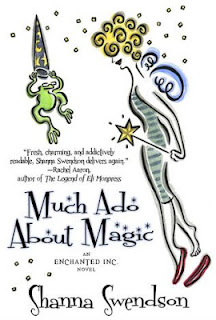 Katie Chandler is back in New York and at Magic, Spells, and Illusions, Inc. – and just in time. The city’s in the grip of a magical crime wave from spells that wizarding whiz Owen Palmer thinks look awfully familiar, and the rogue firm Spellworks is raising its profile in the magical world by selling protective amulets. It’s Katie’s job as the new director of marketing for MSI to fight this battle of public perception while Owen and the other wizards try to uncover what’s really going on.

What Katie doesn't realize is that her idea to stage a showcase for MSI's magical achievements is playing right into a devious plot more than three decades in the making. Now Katie has to do damage control that has nothing to do with marketing. To save the magical world, she’ll have to prove who the real enemy is, and doing that will require digging deeper into Owen’s mysterious past than he wants anyone to go. If she fails, she not only stands to lose a magical war, but she could also lose the man she loves.

HOLD THE PHONES! I just learned that there will be a book #6. Cue the pompoms.

Book six will be called No Quest For The Wicked and Goodreads is saying that it was released on the 1st! Happy October! *hops off to request the book on NetGalley* (ha..."hops"...get it?)

Anyway. Back to the review!

I really enjoyed catching up on Katie and all of her magical - and non-magical - friends. Though, truth be told, I kind of forgot what had been going on. Four years is a long time to wait. My advice? Reread at least book #4 (Don't Hex with Texas) before diving into this one.

What I like about this series is that even though it's a fantasy and the characters are almost all magical beings, it's so relatable. Take out the magic and you've got a typical struggle in the workplace, a (very chaste) romance, and a bunch of girlfriends living in New York. That's kind of oversimplifying but you know what I'm getting at, right? I think that's what makes me like some fantasy books over others. As long as there's something that grounds the story in reality I enjoy it a lot more.

It was really great to finally find out what was in store for Katie. She really seemed to come into her own in this novel, which was awesome. She really understands the magical world but can, literally, see through the illusions and answer questions that magical beings cannot. I was also curious about the future of MSI, her workplace, as well. And, of course, how things would turn out with her and Owen. I was a little disappointed in the romance department though. Not because anything bad happened but because nothing really...happened. It was like reading about a couple who were in the fifth grade. Apparently I would have liked a little more heat! That's definitely not a negative, it was just kind of strange that there didn't seem to be any sort of physical connection but I suppose that's just Owen's way.

Overall, I really enjoyed reading Much Ado About Magic. It was fun, sweet, and had just the right amount of action. I'm so glad that I FINALLY got to read the fifth book in the series. Shanna Swendson finds a great balance between magic and reality that is wonderful to read. I'd definitely recommend this series if you like light-hearted magical books.