Just Finished: All At Sea 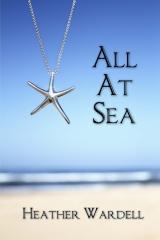 It should come to no surprise to regular readers of this blog that I love Heather Wardell and all of her novels.  I was more than happy to agree to review her latest, All At Sea. As usual, her novel didn't disappoint! I devoured this book in three sittings...er...well, two sittings and one gym workout! It was one of those books that I couldn't wait to finish but I also didn't want it to end. Hallmark of a good story!


Melissa and Owen met on New Years' Eve and he proposed on Valentine's Day. Now it's March, and they're about to set sail on a two-week Caribbean cruise - and get married on the last day at sea. Though their relationship's moving fast, Melissa's wanted to be married for years and she knows the smart stable Owen is a great catch so she's sure they'll be fine.

At least, she's sure until she meets his brothers on the cruise and discovers she's dated both of them: Austin, the fun-loving flirt whose kisses still haunt her dreams, and Nicholas, the sweet horror movie fan whose lack of ambition upset her in ways she still doesn't understand.

Melissa expected to spend tons of time onboard with her fiancé, but he instead spends nearly his every waking moment in the casino displaying a previously unseen love of gambling. This surprise, and the time she spends with Nicholas and with Austin, makes her question everything she thought she wanted.

Her relationship with Owen was just fine before, but suddenly 'just fine' doesn't seem good enough to keep a marriage alive for a lifetime. Melissa has two weeks to decide: stay with Owen or jump ship.

As per usual, Heather created some exceptional characters. I was so invested in Melissa's story and was so worried about how things would turn out. Would she go through with the wedding? Would she be true to herself? It actually felt like I was going through this right along with her. That is how emotionally involved I was.

I also loved her friends. Wendy and Mark were so funny and so cute together. Wendy knew just what to do for Melissa when she wasn't sure herself and knew she couldn't keep quiet when her best friend was in such turmoil. I also thought that Austin was hilarious. I'm realllly hoping Heather decides to write a book that features him sometime in the near future :) All of the supporting characters really added to my enjoyment of this novel.

What made this book a little more fun for me was being able to recall my own time on a cruise ship. My sister and I went on our very first cruise in February and had a great time. I thought about where the quiet pool was on our ship, as well as the casino (no, we didn't go in there), and the towel animals that were left in our room. I just found that it was nice to have a personal experience with a cruise to help me enjoy the story just a little bit more. Not that you can't enjoy it if you've never been on a cruise! It just heightened the fun of it for me :)

Side note: I love that Heather was able to get the words "polar bear" into a novel that takes place on a cruise ship. She makes sure to slip it in in every one of her books and I love finding it!

Read All At Sea...seriously. It's wonderful. If you really want to get hooked, go back to the beginning of Heather's Toronto Series and read Life, Love, and a Polar Bear Tattoo (bonus - you can get it for free for your ereader! Click that link to get it for your Kindle). Characters from one book pop up in another and you'll enjoy the novels more fully if you understand the backstories. Heather has ten novels released now and I've read six of them. I wish I had the time to cuddle up with the remaining four over the Thanksgiving weekend (which, by the way, is this weekend for myself and my fellow Canadian readers). If only life didn't get in the way of reading time... :)