Just Finished: Where We Belong 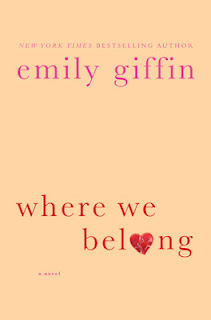 If you asked me who my favourite authors were, Emily Giffin would be one of the first to come to mind. It's no surprise that I have been anxiously awaiting her latest novel, Where We Belong. I couldn't wait to get my hands on it and I devoured it over a weekend. I. Loved. It.


Marian Caldwell is a thirty-six year old television producer, living her dream in New York City. With a fulfilling career and satisfying relationship, she has convinced everyone, including herself, that her life is just as she wants it to be. But one night, Marian answers a knock on the door . . . only to find Kirby Rose, an eighteen-year-old girl with a key to a past that Marian thought she had sealed off forever. From the moment Kirby appears on her doorstep, Marian’s perfectly constructed world—and her very identity—will be shaken to its core, resurrecting ghosts and memories of a passionate young love affair that threaten everything that has come to define her.

For the precocious and determined Kirby, the encounter will spur a process of discovery that ushers her across the threshold of adulthood, forcing her to re-evaluate her family and future in a wise and bittersweet light. As the two women embark on a journey to find the one thing missing in their lives, each will come to recognize that where we belong is often where we least expect to find ourselves—a place that we may have willed ourselves to forget, but that the heart remembers forever.

Have you ever had really high expectations for something and then it just totally lets you down? I was terrified that that was going to happen to me when it came to this novel. That wasn't the case, thank goodness, as I couldn't put this one down. I think I liked that it was a little different than some of Giffin's other works. There wasn't an overt/obvious infidelity storyline that's so prevalent in her other books which was a nice change of pace. Those plots can sometimes be really hard to read (Heart of the Matter anyone? Hoo boy, that was tough).

It was also interesting to read one of her books from the point of view of a teenager. Kirby was the kind of teen that I like reading about because she's smart and mature, even if her parents don't realize it. She's not obsessed with boys and make-up (or sparkling vampires) but she's still a girl and I loved reading her romantic storyline. So sweet! It was really great to see her come into her own and, well, figure out where she belonged.

I was surprised at all the lies that Marian had told throughout her life. I think she was completely justified in the reactions from some people when they found out about Kirby (no - I'm not going to give any of that away!) Also, it almost seemed like she was pretending to be someone else at points. Like she wasn't being true to herself, you know? I don't think she's as cold as you might think and I wonder if her boyfriend had anything to do with the way she was acting or if that's really the way she is. Writing this review I've realized that I couldn't really get a good read on Marian and that could be why Kirby stands out as my favourite character in this book. Hm. Interesting.

I'm desperate for a sequel and I know I'm not alone in that thought. I believe I even read something from Giffin herself saying that she was toying with the idea. Fingers crossed that she lets us know what happens next with Marian and Kirby because the book ends on a bit of a cliffhanger! Even though we are left wondering exactly what's going to happen with all of the characters, I'm happy with how the book ended. I also think I'd like Marian more in the sequel!

Fans of Emily Giffin's other novels will love Where We Belong. I know I'm already waiting for what she comes out with next. And getting super excited to see her on Thursday! That's right - Emily Giffin is coming to Canada (Toronto, to be more specific)! Since I'm not too far from the city, I'm making the trek to see her at Indigo and I am SO EXCITED! I'll share pictures with you all soon :)

Thanks to St. Martin's Press for the copy to review!
Posted by Books Etc. at 6:33 PM

Email ThisBlogThis!Share to TwitterShare to FacebookShare to Pinterest
Labels: Emily Giffin, Where We Belong