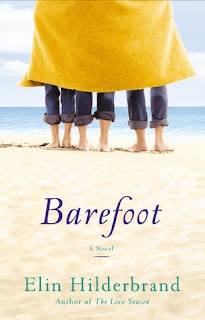 There's no better time to read a novel set at the beach than in the summer, am I right? I confess to having Elin Hilderbrand's The Island on my bookshelf where it's been for about a year. Her novel intrigued me so when my boss offered to lend me her copy of Barefoot I gladly accepted it. And subsequently devoured it over the August long weekend. :) It turns out this is an office novel as my other co-worker just finished reading this one a few weeks ago - and also really enjoyed it. This was my August read for the Chick Lit Challenge hosted by Chick Lit Plus, which I'm loving. It's giving me a chance to read those books I've been meaning to get to that aren't a part of all the tours I'm participating in!

It's summer on Nantucket, and as the season begins, three women arrive at the local airport, observed by Josh, a local boy, home from college. Burdened with small children, unwieldy straw hats, and some obvious emotional issues, the women--two sisters and one friend--make their way to the sisters' tiny cottage, inherited from an aunt. They're all trying to escape from something: Melanie, after seven failed in-vitro attempts, discovered her husband's infidelity and then her own pregnancy; Brenda embarked on a passionate affair with an older student that got her fired from her prestigious job as a professor in New York; and her sister Vickie, mother to two small boys, has been diagnosed with cancer. Soon Josh is part of the chaotic household, acting as babysitter, confidant, and, eventually, something more, while the women confront their pasts and map out their futures.

I fell in love with this story from the start. I was just as intrigued as Josh when the three women came off the plane in Nantucket. Who were they and what were they doing there? I was really happy that Josh played more of a role than I initially thought. I knew he would have to be involved somehow but I wasn't expecting him to become the babysitter. (No, I didn't read the synopsis before reading this one.) It was so sweet to see him in that role and embrace looking after two little people for a summer. Maybe I was a little in awe of him, too. There's no way I would have agreed to babysit a toddler and a baby for a summer - no matter how intriguing I found their family! :) It was great seeing Josh grow as a character, and a man, through the course of the book.

What I liked about this book was the relationship between the three women and how they were all dealing with their own problems - they were huge problems, too. It was interesting to see how they adjusted to each other over the course of the summer and how they helped each other, even when they weren't meaning to.

I didn't really find myself as interested in one of the women as much as Josh. I wonder if it had to do with the fact that I was reading as though I was in Josh's position - observing the women and feeling what he was feeling as opposed to being in the women's shoes. Does that make sense? That's not to say they weren't good characters, because they were. I guess I just liked watching and learning about Vickie, Brenda, and Melanie instead of trying to put myself in their lives.

I admit that I did find myself tearing up in a couple of parts. This was an emotional story and I was really worried about the outcome to everyone's story. I don't want to give specifics away but here comes a general spoiler-esque comment - there are happy endings.

I'm really glad I got the chance to read Barefoot by Elin Hilderbrand and I will definitely be checking out her other novels!