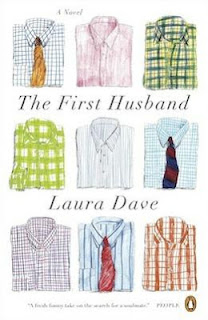 I had heard about The First Husband by Laura Dave awhile ago but it took me some time to finally get around to reading it. I'm so glad I did! It was fun, sweet, and had some wonderful characters. I decided to review this one for my June read of the Chick Lit Plus Challenge.

Here's what this novel is all about:


Annie Adams is days away from her thirty-second birthday and thinks she has finally found some happiness. She visits the world's most interesting places for her syndicated travel column and she's happily cohabiting with her movie director boyfriend Nick in Los Angeles. But when Nick comes home from a meeting with his therapist (aka "futures counselor") and announces that he's taking a break from their relationship so he can pursue a woman from his past, the place Annie had come to call home is shattered. Reeling, Annie stumbles into her neighborhood bar and finds Griffin-a grounded, charming chef who seems to be everything Annie didn't know she was looking for. Within three months, Griffin is Annie's husband and Annie finds herself trying to restart her life in rural Massachusetts.

The synopsis makes Annie and the story seem a little...crazy. Marry someone three months after meeting them? Almost everyone would think that's a little quick. But, when you're reading about Annie and Griffin and their relationship it just makes sense.

I was so wrapped up in Annie's story that my heart hurt for her when she was realizing she had to make a very difficult choice. I could see that she wanted the one outcome but was not emotionally able to make that happen. So, even though I wish she hadn't decided to do what she did, I'm still glad she did as it led her to the outcome I wanted for her to begin with. Confused? I know it's vague but I don't want to give anything away! Point is, Annie has to make a lot of tough choices and since she doesn't think she can make the choice she does what she does best - relocates.

I've mentioned before that travel writers as heroines seem to have the best built in drama. They "obviously" have commitment issues since they never stay in one place for very long (but it's for work, they'll say). I really liked how Dave played with Annie's issues and her job. It seems to be the reason she's never really settled but is that really it or is she using it as a crutch? It was interesting to see how Annie evolved and learned about herself.

I really liked Griffin. He was funny, sweet, caring, and a real guy. Bonus: he's a chef. Who wouldn't want to marry a chef? The romance between Griffin and Annie started out so smoothly but quickly ran into some problems. They both had some issues to work out and I enjoyed reading about their journey.

Overall, I think all chick lit lovers would enjoy The First Husband. I plan on checking out some of Laura Dave's previous works and I look forward to what she comes out with next.