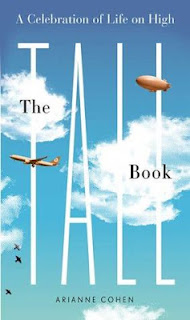 Calling all tall people! I have found a book that you MUST read. No exceptions. I heard about The Tall Book by Arianne Cohen a few years ago, finally bought it close to a year ago, and have just gotten around to reading it (and full disclosure, it's taken a few weeks to get this review up too!). I don't know why I waited so long because I loved it. LOVED it. Let's get to the synopsis and then I'll tell you why I was so obsessed with this book.

Here's what the book is all about:


Tall people: Smart. Wealthy. Successful. U.S. Presidents, Oscar Winners, NBA players, CEOs.
Scrunched into airplane seats. Unable to find good clothes. Why?
In this, the first book of its kind, Arianne Cohen—all 6’3" of her—takes us on a tour of the tall world, traveling from endocrinologists’ offices to the annual European Tall Club Convention to unlock the mysteries at the center of talldom: why do tall people succeed professionally, financially and intellectually far more than others? Why are tall men the most successful dating and mating group on earth, while tall women have low birth rates? And who the hell is behind those airplane seats?
Part investigation and part personal story, The Tall Book follows Arianne as she circles the globe, meeting the tallest people in the world, questioning them on how to raise a well-adjusted tall kid, and yes, becoming one half of America’s tallest couple.

I am tall. 6' to be exact. Because of this, I found myself constantly nodding and agreeing with what Arianne was writing. Desks being too short in school? Check. Unable to find clothes (especially pants) that fit? Check. Not being able to see your head in some mirrors? Check. Banging your knees against the front of the elliptical machine? Check. I could go on and on and on but the point is that most tall people have similar problems and it was so awesome to have a book completely dedicated to being tall.

I don't usually read a lot of non-fiction. There's no real reason for this, mostly that I just tend to stay to the fiction side of the book store unless there's a topic that really interests me or I have a personal connection with. The Tall Book wasn't your typical research book because Arianne peppered her facts and figures with personal anecdotes. This made the book much more interesting and humorous.

At the very front of the book is a chart with average heights of men and women aged 30-39. Women are, on average, about 5'4"-5'5". Men are about 5'10" on average. I've always known I'm above average height but it's something else to see numbers confirm that you're taller than the average male. Though, my days in high school should have tipped me off. There were only a handful of boys who were my height or slightly taller. There was one notable exception - a guy who was 6'7". Other than him, I either looked down at the boys I went to school with or were at eye level. I was the tallest person at prom, for crying out loud. I always thought that I'd be single when I went away to university and then I'd find myself a varsity basketball player. In fact, in the little write up next to my grad pictures in the yearbook I wrote "Desperately Seeking: Tall boys and long pants." You may laugh but they're both hard to come by. Of course, life intervened and I ended up dating a guy just before graduation and we're still together 7 years later. Oh, and I'm 4" taller - and neither of us care :)

Accompanying this chart is a bit of a disclaimer: "Because everyone asks: What is the definition of tall? You are tall if you're taller than the people around you. Height is relative." I think this is so true. Sure, I know there are women out there who are taller than me but I also know I'm on the gawking side of tall. Kids are the best. There have been numerous times that I've been out shopping where a child has seen me, looked way up, and said "Woooow. Mommy! She's really tall!" The parents are always embarrassed and apologize but I kind of love it. Of course, I have a double standard and it sometimes drives me nuts when an adult says, "Wow, you're really tall!" as if I have no idea I'm 6'. I can let it slide with a kid because they don't really know any better. An adult should realize that I know that I'm tall. There are some days that I desperately want to say, "Holy crap! You're right! No wonder I hit my head off so many things." Sigh. If only that were socially acceptable.

There's a section of this book that talks just about athletics and height. It's incredibly interesting. I'm lucky as I don't get annoyed by the question "Did you play basketball/volleyball in high school?" as I actually did play both. As I learned reading this book, a lot of tall folk get asked that and it's incredibly frustrating to them because those who ask automatically assume all tall people are blessed with the talent to play those sports. There's a definite advantage to being tall in those sports but that doesn't mean you're awesome just because you're tall. I'm your proof. Sure, I was quite good at basketball and played all through elementary and high school. But I never had the skills to go further than that. Sometimes, when I feel like blaming others, I say it's because I was never taught proper ball handling skills when I first started out in grade five. I was always tall so the coaches stuck me at forward (the tall person position) and never thought to make sure I knew how to dribble. Of course, if I really wanted to I could have taught myself but I was never ambitious enough. Ah well. :)

I'm sure I drove my boyfriend nuts with all the little tidbits I was learning when I was reading this book. But they were so interesting that I just had to share! For example...
There were lots of fun facts that I learned and I could keep spouting them off to you but I won't. Mostly because I don't feel like typing any more of them and partly because I think you should read the book yourself to learn all sorts of other info :)

All in all, I had an awesome time reading The Tall Book by Arianne Cohen. I've decided that I must travel to the Netherlands as things are better suited for tall people. Of course, I have to squish myself into the tiny airplane seats to get there... 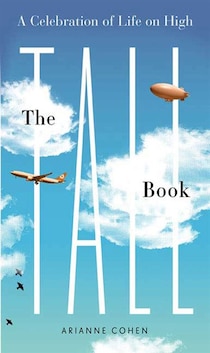 Buy from Indigo
Buy from Amazon.com
Posted by Books Etc. at 5:03 PM