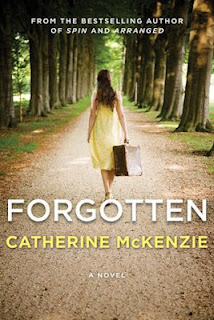 Catherine McKenzie is one of my favourite authors - she gets bonus points for being Canadian - so I was very excited when I learned she would be publishing a new book this spring. Forgotten (published May 1) is McKenzie's third novel (I've reviewed her first two on this blog, Spin is here and Arranged is here and both made it on my top books I read in 2011) and I was lucky enough to snag a review copy from NetGalley.

Here's the synopsis for her new release:


When everyone thinks you’re dead, how do you start your life over again?
Emma Tupper, a young lawyer with a bright future, sets out on a journey after her mother’s death: to Africa, a place her mother always wanted to visit. But her mother’s dying gift has unexpected consequences. Emma falls ill during the trip and is just recovering when a massive earthquake hits, turning her one-month vacation into a six-month ordeal.
When Emma returns home, she’s shocked to find that her friends and colleagues believed she was dead, that her apartment has been rented to a stranger and that her life has gone on without her. Can Emma pick up where she left off? Should she? As Emma struggles to recreate her old life, everyone around her thinks she should change – her job, her relationships, and even herself. But does she really want to sacrifice everything she’s working so hard to gain?

It's quite the interesting premise, isn't it? I can't know exactly what Emma was feeling during this insane/tumultuous/stressful time but because of the way McKenzie writes I was better able to imagine it. I did think that Emma was crazy because she assumed she could just plop herself back into her old life without any issues whatsoever but I didn't think she needed to change something about her life, as many others believed she should. If you like your life, why should you bother changing things just because you've gone through a traumatic event? Makes sense to me. It was tough to read when Emma realized that things were not going to be as easy as she hoped. It's a brutal situation but she handles it well and I was so happy with the way things turned out for her.

Even though this book deals with some pretty serious issues there are still some light and humorous moments. For example, there is a scene that involves Emma wishing she could use the Marauder's Map incantation from Harry Potter. This would be most hilarious to Harry Potter lovers but even those who don't know which spell I mean can appreciate the humour in an adult female lawyer wishing she was able to use the same magic as teenage boy wizard.

I don't want to give anything away (and, ok, I didn't make specific notes) but I just want to say - I love love love the New Year's Eve scene. It's sweet, fun, and a little heartbreaking all at once.

I adored Emma's best friend Stephanie. The two were childhood best friends who continued to grow closer as they got older. Stephanie has been with Emma through it all and is able to provide a family-type link when Emma is left alone after her mother's death. She knows just when to push Emma and when to leave her on her own, and is always there for her. In short, she's an amazing best friend - and a well written character. In fact, I would love to learn more about Stephanie and find out what she's up to now. At the end of Forgotten she's launching a new business that I think would be quite entertaining. What do you think, Catherine - care to write a sequel that focuses on Stephanie? :)

I could probably continue gushing about this novel but I won't. Instead I will say: I cannot recommend Catherine McKenzie's books enough. If you want to check them out and wonder what order you should read them in, I would personally suggest starting with Spin, moving on to Forgotten, and finishing up with Arranged. By then, I would hope that you'll be just like me - already eagerly awaiting her next novel.