Just Finished: I've Got Your Number 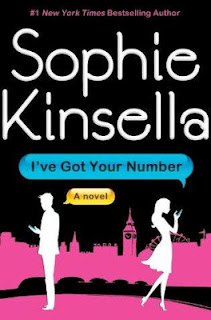 I'm a huge chick lit fan so it's no surprise that I jump on Sophie Kinsella's novels as soon as they're released. I was lucky enough to snag a copy of I've Got Your Number from NetGalley (thanks Random House!) and I devoured it over a weekend. Of course I'm a little behind the times as that weekend was over a month ago and since then I have gone on a trip and moved and started a new job. Oops. Either way, I enjoyed this book and think my fellow chick lit lovers will like it too.

Poppy Wyatt has never felt luckier. She is about to marry the ideal man, Magnus Tavish, but in one afternoon her 'happy ever after' begins to fall apart. Not only has she lost her engagement ring but in the panic that followed, she has now lost her phone. As she paces shakily round the hotel foyer she spots an abandoned phone in a bin. Finders keepers! Now she can leave a number for the hotel to contact her when they find her ring. Perfect!

Well, perfect except the phone's owner, businessman Sam Roxton doesn't agree. He wants his phone back and doesn't appreciate Poppy reading all his messages and wading into his personal life.

What ensues is a hilarious and unpredictable turn of events as Poppy and Sam increasingly upend each other's lives through emails and text messages. As Poppy juggles wedding preparations, mysterious phone calls and hiding her left hand from Magnus and his parents... she soon realises that she is in for the biggest surprise of her life.


I've read all of Sophie Kinsella's novels and even a couple of her Madeline Wickham novels as well - even though I don't like those ones as much, weird. I always read her newest novels as soon as I possibly can but...here's the kicker...I always find her protagonists mildly irritating. But I still keep going back for more! There's something about Kinsella's main characters that just sometimes bug me. I usually find that her characters lack common sense and it takes awhile for them to work through their issues, but they always do.   I think that's why I always go back to Kinsella because because things always work out in the end. Don't know what that says about me or Kinsella, but there you have it. Her characters annoy me but they're still loveable enough for me to enjoyt her books. Figure that one out :)

I found that this novel had an different sort of plot to it. Yes, there was the typical romance and the issues that come along with that (this one was focused on having to choose between two very different men) but the other part of the story ended up focusing on a corporate scandal that Poppy ends up helping to solve. Don't get me wrong, it was pretty interesting and fun to see how the characters would sort through the PR nightmare, but for some reason it came as a surprise because it was in a Kinsella novel. I can't exactly explain it and I feel kind of bad as I feel like I'm stereotyping her. I do think she may be trying to get into slightly different kinds of stories, remember Twenties Girl? I found that one to be quite different than her previous novels. Not bad, just different.

I didn't loooove I've Got Your Number (I could tell because I didn't immediately tell my mom she needed to put her name on the reserve list at the library and that's usually what I do when I read a book that I think needs to be read by the rest of the world) and it's not my favourite Sophie Kinsella novel (that honour goes to Remember Me?). However, I know chick lit lovers will want to read it and I think they should. I don't think they'll be disappointed and I think most will end up really loving this one. It's a happily ever after story which is why I will continue to go back to Sophie Kinsella, time and time again.