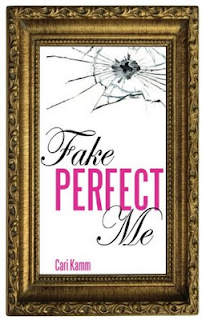 I love reading books that surprise me with a fantastic underlying message and Fake Perfect Me by Cari Kamm was one of those books for me. I had a feeling I'd probably enjoy the novel but I had no idea that I would go on such a journey with Isabella and that was so great.

Here's the synopsis, courtesy of Goodreads:

Isabella Reynolds seems to have it all the former Southern belle with big dreams is the head of her own skin care company and is the self-proclaimed queen of all things beautiful in New York City. Then her world comes crashing down, and she is stripped of everything she loves her man, the Italian litigator "Saint" Santo; her company, and even her beloved dog, Potato. With her penchant for bingeing and purging, how can she turn her life around when she still feels the need to maintain her "perfect" facade?
"Fake Perfect Me," author Cari Kamm's heart-warming--and often heartwrenching--tale of a successful New Yorker and her inner circle, offers an inside look at a world of excess. Isabella Reynolds may seem unlike anyone you've ever known, but at her core, she's instantly recognizable. Her trials and tribulations, her ups and downs, are much the same as anyone's. Her world may have a high price tag, but its true value comes from its losses and lesson...to love one's self.

One of the things that I really enjoyed about this book is a little strange but I hope others who read this had the same thought. Isabella is incredibly rich so she's able to eat at whatever restaurants she wants to eat at and shop at the best designer boutiques and travel whenever and wherever she likes. Once I realized how much money Isabella had, I was a little worried that she would be snobby and annoying. I had no need to worry - she's incredibly likeable and I could see myself being friends with her...even though her Monolo Blahnik obsession could keep a roof over my head for months! Reading about Isabella's lavish life was great. It was sort of like Kamm thought about what almost every woman would love to be able to do (eat the best food, shop at the best stores) and just went with it without worrying about practicalities. We know money isn't an issue with Isabella so it doesn't become an issue with the reader either. We get an insider look into the way the other half live and it's a lot of fun.

I loved Isabella. While I'd never be able to fully know what her life is like, I felt like I could really identify with her. She's so real - apart from the fact that she's hiding her bulimia from her friends. I'm happy with how that issue eventually gets resolved but I really wish she had had a friend that was brave enough to approach her about her problem as I'm convinced they knew about it. She's dealing with so much and, even though I don't really approve of some of her coping mechanisms (drinking yourself into oblivion over and over again isn't the best plan), she eventually realizes how much harm she's doing and comes across a great way to heal herself.

As I mentioned earlier, this book had a fantastic message. There's really no such thing as "perfect" even though many women (probably all women, to some degree) strive to be so. This novel shows the struggle one woman goes through and I think most readers should be able to find something in Isabella's journey to identify with. This book really made me think about how I portray myself to others and how I really feel about myself. The novel could have become too preachy or self help-y but Kamm does a magnificent job of making sure it didn't stray into that territory. What the book ends up being is a fantastic fictional story with a wonderful message - learn to truly love yourself and embrace who you really are.

Thank you to Cari Kamm for arranging to have a copy sent to me for a review. I really appreciated getting the chance to read this novel. I definitely recommend this one to all females, even if they don't usually read chick lit-esque novels. Fake Perfect Me provides a great story, a wonderful protagonist, and a beautiful message. Read it. You won't regret it.